The third stop of our mini “roadtrip” in Portugal was Lagos and it was definitely different than the Portugal we’ve seen before. Lagos was full of stunning beaches, cliffs and a small centre. Out of all of the places we visited, it was definitely my favourite and I can’t stress enough how bad I want to go back there!

Now, if you’re lucky enough to visit Lagos in the future, I got some recommendations on which beaches to visit and what to do there! I hope I can help you out and let’s start this!

Praia Dona Ana was the first beach we visited. The beach was stunning and, as we went there in the evening, the waves were really high. There were some rocks in the water and all in all it just looked really beautiful.

There are some hotels close to the beach, so it may be a little more crowded than the other ones in Lagos, however, I have to say right away, that none of the beaches were too crowded.

Ponta da Piedade was probably my favourite place to visit in Lagos. Furthermore, whenever I think about Lagos, the stunning cliffs are definitely what comes to my mind first. At Ponta da Piedade you are on top of those cliffs, with some stunning views at the ocean, a lighthouse and some greenery.

We went there twice, once in the evening to watch the sunset and once during the day to truly enjoy all the beautiful colours. To get to Ponta da Piedade, you have to walk for quite a bit, but it’s mostly just straight up a street. Once you arrive, it’s totally worth it.

There, you can explore the top of the cliffs and wanter for a little while enjoying the views this place has to offer. Ponta da PIedade is probably the number one place, I would advise everyone to visit when staying in Lagos.

One of the coolest things we did in Lagos, was to take part in a Kayak tour. We were a group of about 10 kayaks following a tour guide to some stunning places under the cliffs. We even made a stop at a beach, were we chilled for about an hour.

The tour was really nice and the guides were fun. Kayaking was definitely a challenge at the beginning, but we got into it very fast. Two of us always had to share one and, therefore, work together. We definitely saw a lot of places I wouldn’t have seen alone, or even known about.

After our stop at the beach, we would be taken back by a motorboat (looking like a family of tourist ducklings), which was quite fun. I don have a lit of the clips from the Kayak tour in my Portugal video, so make sure to check it out here for more impressions!

One cool place we visited during the tour was a little “cave” close to the Ponta da Piedade, where the water had a stunning, saturated blue colour. Sadly, I can’t really show you a good picture of it as it was pretty dark, but for me that was definitely already worth it.

The bridge forms a little arc together with the rocks and I spent a lot of time just looking at it and wondering why it’s there. Sadly, I couldn’t find anything about that on the internet, but it does look really impressive.

At Praia Estundantes you will also find a little “tunnel” in the rocks, where you can easily get to the next beach.

Pinhao beach was my favourite beach in Lagos. It wasn’t too crowded, the water was nice and there was a little cave in the water which was looked unreal when you walked inside. There were even a few crabs living in that cave.

You can either reach it by going down the stairs, or through some caves and other beaches. We generally had a lot of fun while going from one beach to another without taking the stairs up to the main street and then down to the next besch again.

For most of the beaches you can get from one to another through some caves or the shallow water. That way, we stayed at about 4 different beaches in a day as we always switched places and tried to discover new ones!

In the center of Lagos you can find a lot of bars and clubs. Most of them are pretty small and have only a few seats outside.

However, you can see that a lot of people are out in the evening . The drinks are quite cheap and many places will distribute flyers during the day, which either offer cheaper drinks, or entry.

When strolling through the center of Lagos in the evening, you might hear some talented voices. We heard a lot of talented singers on the streets and let me tell you, listening to their voice in a summer night is a feeling I can‘t describe.

Benagil Cave is a place I couldn’t make it to while visiting Portugal as we didn’t have a lot of time in Lagos and decided not to visit it as people told us that it was quite crowded. However, I didn’t want to leave it out of this listing, as it is probably one of the biggest sights when visiting Lagos.

Benagil cave is not as close as the other places on this list, in fact, you have to take the bus or book a boat tour to get there. It still looks stunning and pretty unreal on the photos I’ve seen, so I would still recommend visiting as I would have visited if I stayed for longer. 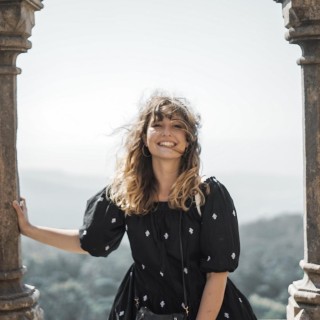